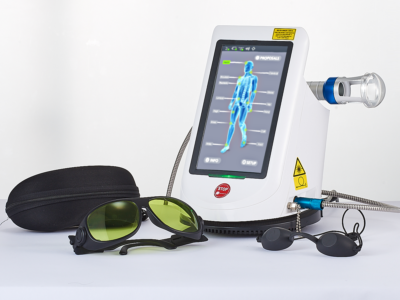 Bloomington Wellness Center is excited to offer the most advanced healing therapies available.  Our office offers both the original low-level light ‘cold laser’ and the new advanced higher powered Class IV laser.   The Class IV Laser has a significantly higher depth and energy of tissue penetration, allowing the most therapeutic impact.   The larger joints and deeper tissues of the body benefit the most from Class IV laser treatments.  BWC employs an industry-leading device, with a safe, yet high-level wattage output and four separate therapeutic wavelengths.  Most Class IV devices only offer one or two wavelengths.  The increased power and number of wavelengths mean quite simply – deeper, faster, and more effective tissue healing.

Therapeutic lasers work by supplying energy to the cells of the body in the form of a photon of light.  The cells absorb this energy, utilizing it accelerates the healing process.

Benefits of the Class IV Laser:

Some may benefit in a visit or two, but it may take 6-12 visits before a lasting change is made.  Results are dependant on a number of factors including the area of the body, chronicity, and severity.  It is best to speak with your doctor about individualized treatment expectations.

Since there is generally no insurance reimbursement for laser therapies, Bloomington Wellness Center has made this cutting-edge therapy very affordable.   Single session: $52, (5) Sessions: $225, (10) Sessions: $425.

Many of the benefits and modes of action of Class IV laser overlap with the original lower-powered cold lasers. Please view our pages on cold laser therapy to learn more. (Available: Bloomington Location)

We offer cold laser therapy to promote the fast healing of acute injuries and to help manage chronic inflammation. The cold laser is a safe treatment with many benefits. Treatment is convenient: you can use it at our location, or in your home. 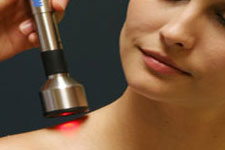 When the body is injured, cells are damaged and fail to function normally. Low-level waves from the cold laser unit penetrate into the skin and restore normal cellular function. Cold laser uses a non-heat-producing light laser, locked at a wavelength optimal for treatment, to penetrate into the tissues. Cold laser, also called low-level laser therapy (LLLT), is a proven effective modality for both chronic and acute healing.

Cold laser has been shown to significantly accelerate and enhance the body’s natural defense and repair mechanisms. Physiological effects include improved metabolism, circulation, and tissue healing. By reducing the duration of inflammation and enhancing specific repair and healing processes, cold laser has been proven to provide pain relief, reduce damage, and loss of function from injuries.

COLD LASER THERAPY IS USEFUL FOR MANY CONDITIONS, INCLUDING:

Professional Athletes: Cold laser helps top athletes return to competition quickly after an injury. US Postal Service Tour de France team was involved in quite a few bad wrecks, yet they were able to race the next day. According to Jeff Spencer, their chiropractor who treated them with Cold Laser, if an injured athlete can get in for laser treatment within 2-3 hours of the injury, rehabilitation time can be cut in half.

Nerve and Spinal Injuries: According to a study at the University of Health and Sciences, Bethesda, MD., cold laser can rehabilitate severed nerve bundles at a 300% faster rate than the control group’s rehabilitation (research conducted by Anders and Broke). The recovery observed in the study occurred after (14) 90-minutes treatments (LLLT, not Class IV). These results suggest a promising future for cold laser treatment of peripheral nerve damage and spinal cord injuries.

Other Injuries: Cold laser can increase range of motion and muscle strength, decrease pain and inflammation, and accelerate healing time for a variety of injuries. Lasers are painless and sterile, with no undesirable side effects. Chiropractors and physical therapists use cold laser for conditions including the following:

Treatment Frequency: Variable based on condition.  Daily to twice weekly for 2-4 weeks for severe or chronic conditions. Some conditions may only be treated occasionally or as required.

The Therastim electrical stimulation unit is the device used in the popular “ARPwave” therapy.  Though BWC office does not offer ‘ARP Wave’ treatments, similar benefits can be obtained with this device.  It uses sets of conductive electrode pads to provide neuromuscular stimulation. It treats the neurological origin of soft tissue conditions, not just the physical symptoms.

The Therastim features a unique electrical mechanism designated as a class 2 medical device by the FDA. Treatment can include unique Therastim protocols and testing techniques. 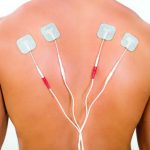 Interferential therapy transfers electrical current through the skin where it interacts with the nervous system interrupting peripheral pain receptors leading to the brain. This results in a decrease of pain sensations.  Additionally, such electrical stimulation causes the body to release its own natural endorphins to promote pain relief and healing.

Many are familiar with TENS therapy, the small hand-held device with electrodes to attach to the skin, generally powered by a 9V battery.  Though it can serve as a useful home therapy, the deep therapeutic benefit can only come from interferential therapy.  Interferential travels at a higher frequency allowing it to penetrate deeper into tissues of the body and manage symptomatic areas in ways that the standard TENS cannot.

Therapeutic ultrasound is a modality that has been used for decades.  It is applied using the head of an ultrasound probe placed in direct contact with skin utilizing a transmission coupling gel.

Ultrasound has been shown to cause increases in:

Ultrasound causes deep heating in the tissues through high-frequency soundwaves penetrating the tissue, this results in an increase in local blood flow to help reduce local swelling and chronic inflammation.

Treatment Frequency: Variable based on condition. Often twice per week for 2-4 weeks for severe or chronic conditions. Some acute conditions may only be treated occasionally.

Questions? Please call or email us!